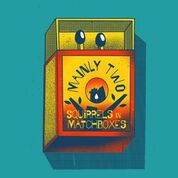 Squirrels in Matchboxes is the third album from UK-based contemporary violin duo Mainly Two. Recorded live at Blank Studios, Newcastle upon Tyne, the record features new works from three British composers who straddle the border between jazz and classical music, as well as two free improvisations by the duo. From the playful to the melancholic, the brutal to the plain silly, Mainly Two are rejuvenating the world of two violins, summoning a universe of colour from eight strings.